There are 6 models.
Water fall Model (or) Sequential Model
Waterfall approach was first Process Model to be introduced and followed widely in Software Engineering to ensure success of the project. In "The Waterfall" approach, the whole process of software development is divided into separate process phases. 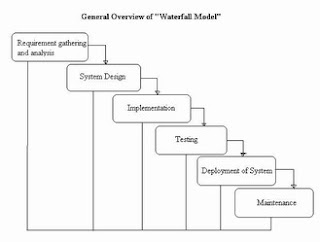 The stages of "The Waterfall Model" are:

Requirement Analysis & Definition: All possible requirements of the system to be developed are captured in this phase. Requirements are set of functionalities and constraints that the end-user (who will be using the system) expects from the system. The requirements are gathered from the end-user by consultation, these requirements are analyzed for their validity and the possibility of incorporating the requirements in the system to be development is also studied. Finally, a Requirement Specification document is created which serves the purpose of guideline for the next phase of the model.
System & Software Design:
Before a starting for actual coding, it is highly important to understand what we are going to create and what it should look like? The requirement specifications from first phase are studied in this phase and system design is prepared. System Design helps in specifying hardware and system requirements and also helps in defining overall system architecture. The system design specifications serve as input for the next phase of the model.
Implementation & Unit Testing:
On receiving system design documents, the work is divided in modules/units and actual coding is started. The system is first developed in small programs called units, which are integrated in the next phase. Each unit is developed and tested for its functionality; this is referred to as Unit Testing. Unit testing mainly verifies if the modules/units meet their specifications.
Operations & Maintenance: This phase of "The Waterfall Model" is virtually never ending phase (Very long). Generally, problems with the system developed (which are not found during the development life cycle) come up after its practical use starts, so the issues related to the system are solved after deployment of the system. Not all the problems come in picture directly but they arise time to time and needs to be solved; hence this process is referred as Maintenance.
Advantages of Waterfall Model
·         It is a simple model.
·         Project monitoring and maintenance is very easy.
·         The project requires the fulfillment of one phase, before proceeding to the next. Therefore if there is a fault in this software it will be detected during one of the initial phases and will be sealed off for correction.
Disadvantages of Waterfall Model
·         The life cycle can take so long that the original requirements may no longer be valid by the time the system is implemented.
V-Model 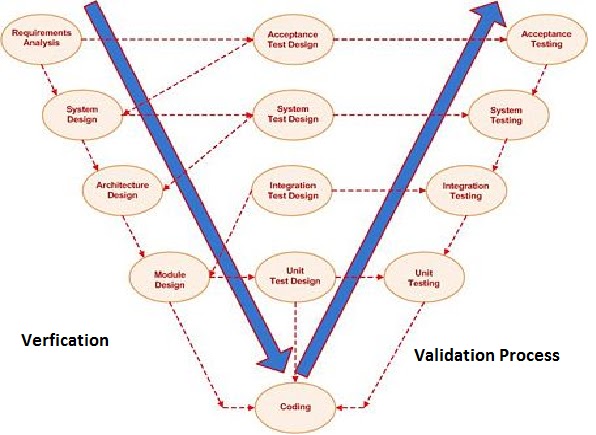 The V-Model demonstrates the relationships between each phase of the development life cycle and its associated phase of testing.
The V-model can be said to have developed as a result of the evolution of software testing. Various testing techniques were defined and various kinds of testing were clearly separated from each other which led to the waterfall model evolving into the V-model. The tests in the ascending (Validation) hand are derived directly from their design or requirements counterparts in the descending (Verification) hand. The ‘V’ can also stand for the terms Verification and Validation.
V-Model is more helpful and profitable to companies as it reduces the time for whole development of a new product and can also be used to some complex maintenance projects.

In this phase, the requirements of the proposed system are collected by analyzing the needs of the user(s). This phase is concerned about establishing what the ideal system has to perform. However, it does not determine how the software will be designed or built. Usually, the users are interviewed and a document called the user requirements document is generated. The user requirements document will typically describe the system’s functional, physical, interface, performance, data, security requirements etc as expected by the user. It is one which the business analysts use to communicate their understanding of the system back to the users. The users carefully review this document as this document would serve as the guideline for the system designers in the system design phase. The user acceptance tests are designed in this phase.

System engineers analyze and understand the business of the proposed system by studying the user requirements document. They figure out possibilities and techniques by which the user requirements can be implemented. If any of the requirements are not feasible, the user is informed of the issue. A resolution is found and the user requirement document is edited accordingly.
The software specification document which serves as a blueprint for the development phase is generated. This document contains the general system organization, menu structures, data structures etc. It may also hold example business scenarios, sample windows, reports for the better understanding. Other technical documentation like entity diagrams, data dictionary will also be produced in this phase. The documents for system testing are prepared in this phase.

This phase can also be called as high-level design. The baseline in selecting the architecture is that it should realize all which typically consists of the list of modules, brief functionality of each module, their interface relationships, dependencies, database tables, architecture diagrams, technology details etc. The integration testing design is carried out in this phase.

This phase can also be called as low-level design. The designed system is broken up in to smaller units or modules and each of them is explained so that the programmer can start coding directly. The low level design document or program specifications will contain a detailed functional logic of the module, in pseudocode - database tables, with all elements, including their type and size - all interface details with complete API references- all dependency issues- error message listings- complete input and outputs for a module. The unit test design is developed in this stage.

In the V-model of software development, unit testing implies the first stage of dynamic testing process. According to software development expert Barry Boehm, a fault discovered and corrected in the unit testing phase is more than a hundred times cheaper than if it is done after delivery to the customer.
It involves analysis of the written code with the intention of eliminating errors. It also verifies that the codes are efficient and adheres to the adopted coding standards. Testing is usually white box. It is done using the Unit test design prepared during the module design phase. This may be carried out by software testers, software developers or both.

System testing will compare the system specifications against the actual system. The system test design is derived from the system design documents and is used in this phase. Sometimes system testing is automated using testing tools. Once all the modules are integrated several errors may arise. Testing done at this stage is called system testing.

The V-model deploys a well-structured method in which each phase can be implemented by the detailed documentation of the previous phase. Testing activities like test designing start at the beginning of the project well before coding and therefore saves a huge amount of the project time.